A Life of Radio 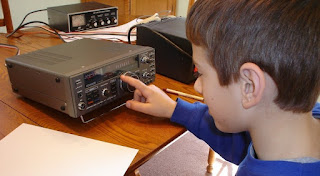 Hobbies can make a difference in one’s life. I thought I would offer some reflections on many decades of involvement with activities outside of work. The first is ham radio. I have been an amateur radio operator for over forty years. Here are some reflections for my ham radio friends:

The bars on the green cat’s eye winked in and out as I found a station giving iceberg reports in the Atlantic Ocean on my parent’s old shortwave radio. The Morse Code signals sounded like alien whooshing sounds because the radio didn’t have a BFO.  Coupling this sound and content with teenage imagination brought a spark to my heart because I wanted to be climbing mountains, cutting through jungles and riding on the roof of buses, not studying chemistry in high school.

Amateur Radio is more than dancing gauges and wisps of solder smoke – it’s about friendships and life lessons. Many of us have made friendships that allow us to have conversations that move from oscillator circuits to favorite hiking trips and then back to Sunspot cycles. Here are some examples of my life lesson.

Community: College is a weird time. You are exposed to all sorts of new ideas – good and bad. But I had a place to hang out with friends at the University of Illinois’ club station, W9YH. It was a great club and a refuge from all the stress and challenges of student life. I would take long walks in college, sometimes with an old portable Drake two meter rig hanging off my shoulder.  This radio gave me everything a lonely heart could want: nature, a clear mind and radio friends to talk to all the while. This was a time when “wireless” was an old fashioned term and my unprotected final had to be replaced whenever the trimmed coat hanger soldered into a PLH239 connector misbehaved. Hams always seemed to support and encourage each other and these are especially gracious qualities during times of loneliness and change. This sense of a distinctive community still provides comfort.

Keeping up with technology: I thought radio teletype (RTTY) was high tech and then I experimented with packet radio using a 300 baud acoustic modem and cut tennis balls for the phone cradle. This experimentation moved to a range of digital modes including APRS for monitoring cliff temperatures and on a kite-lifted weather station. I am always several steps behind the latest technology, but ham radio keeps pulling me out of my trenches.

Unique friends: I have met remarkable people through ham radio. Early in my professional career, when I moved to upstate New York, I walked around my neighborhood looking for antennas. I saw a Yagi perched on a 60 ft. tower and knocked on the door. From this introduction, I made a new friend with Henry who learned about World War I when the bells of his village church started ringing. When he asked why they were ringing, he was told that his Germany was now in a war with France. He told me about how he looked for shiny rocks to make "cat whisker" rectifiers and listened to the handful of stations in Europe during the beginning of the 20 th century.

Public service: From traffic control to tornado spotting, ham radio has been an entry point that let me help people. One unique public service event was monitoring overpasses for people dropping pumpkins during Halloween. I did this with a senior executive at my company. He shared his World War II navigation stories and our ham radio friendship became a great equalizer. Bike race monitoring, parade assistance, air show communications, and Field Day have all been peculiar mixes into my everyday life.

Goal setting: Getting my Extra Class license taught me about setting goals and working hard to accomplish them. I struggled to learn the 5 word per minute Code needed to get my Novice. After I earned my license and made those shaky first contacts, I made the arbitrary goal of getting my Extra Class license within one year. I worked really hard to learn the required 20 word per minute Morse Code and radio theory within that time. I took long, scary train trips to downtown Chicago sketching Colpitts oscillators on the train journey as I prepared to take my FCC exams. I finally passed my Extra before my self-imposed goal and it is still one of the accomplishments of which I am most proud. Goal setting remains an important element of both my professional and personal life.

Unexpected connections: I’m a mechanical engineer/industrial designer but having an electrical background comes in handy. On my first day at my new job in Venezuela, I volunteered to set up their base SSB station. Early in my career, during those years of great optimism, when I would write lists on how to improve my work efficiency and notes with “great ideas”, I removed my ham gear from my kitchen table and tucked it under the table.  I put a tablecloth on the table and a heated up a meal of stuffed clams and mixed vegetable. I invited my girlfriend over and proposed marriage.  She said “yes” and the ham radio equipment hidden below the dangling tablecloth didn’t realize how this change would affect my relationship with it (ham radio, that is). I moved into the phase of life where you divided things up in to that which you can change and that which can’t.  A time where you still dream but sense the closure of many doors. However, throughout my career, I have frequently needed my practical electronics skills to build control systems.

Hidden Superpowers: Bouncing signals off the Aurora Borealis, the Moon, and all the other odd propagation modes appear to be science fiction to the general public. Those of us that know Code have abilities only few other share. It is always a good, weird fact about yourself. We are some of the earliest users of digital modes – we are like walking museums.

Posted by Thomas Ask at 3:57 PM No comments: