Design works outside science. Science is a useful tool, just like language is a useful tool. But science is based on assumptions of rationality and empirically driven truths that can be drawn from the apparent chaos in which we live. Design embraces chaos and extracts features from it that appeal to humans.

We can use qualitative methods, such as ethnography, and artistic insights to create product appeal to groups different than ourselves. Research requires an articulated framework describing an understanding of how the world works and how you can learn about how it works. It should (but rarely does outside of dissertations) require a positionality statement also because your position with respect to data influences acquisition methods and interpretation, among other things.

As a Christian, I don’t follow “methodological naturalism” as a guide, I believe in God’s personal involvement. However methodological naturalism can’t handle the notion of irrationality. It has a faith component, namely that the human mind is rational and the world has "closed regularities", meaning that there are no exceptions to scientific laws.

The words art, design, and craft have specific meanings. Design can mean a purposeful development of a functional product. Industrial design also considers the artistic influences that create appeal beyond the functional. Industrial design embraces ethnographic methods that aid in designing things appropriate for people who are different than the designer.

I love surprise in design, it has delightfully irrational elements that derive from outside of the weight of science. Pleasant surprise is a beautiful element in design.

Posted by Thomas Ask at 8:29 AM No comments: 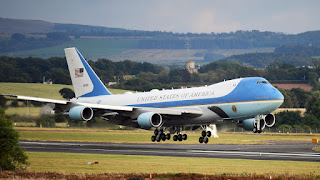 The history of the United States' “Air Force One” is interesting. It involved a famous industrial designer and very personal choices by the John and Jackie Kennedy. Raymond Loewy made two visits with John Kennedy and they worked out the ideas with "crayons and cutting up paper." Here is an account taken from the New England Historical Society:

Then Loewy visited the National Archives to examine historic documents. He was struck by the first printed copy of the Declaration of Independence, it had the new country's name set widely spaced in capital letters in a typeface known as Caslon.

Kennedy had already ordered the Air Force to remove the military lettering in favor of the simple United States of America.  And he told Loewy he liked blue.
Loewy chose two blues: slate and cyan. He left the underside of the fuselage silver and added the presidential seal near the nose, a large American flag to the tail, and the words "United States of America" in capital letters using the Caslon typeface.

The First Lady had a hand in designing the interior of the plane. She made sure the president had his own entrance, a customized bed, a stateroom, a conference room, glassware from Tiffany’s and a pale blue rug with an American eagle in the center of an oval with 13 stars.

Posted by Thomas Ask at 8:09 AM No comments: