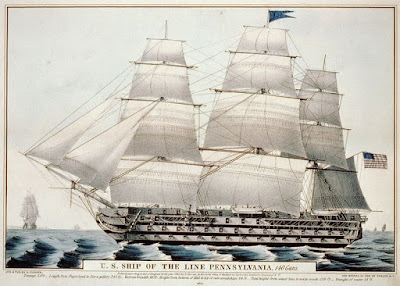 
Borders dissolve and dreams arise as they take you where you want to go. Boats have personality and character infused by those that design and build them. Living in Pennsylvania, it is interesting to look at our namesake Navy ship, the troublesome, original USS Pennsylvania. She was the largest sailing warship built in the US.

She was started in 1816 and finished 21 years later in 1837. Almost...  Over the protests of the locals, she felt the ocean swell briefly as she sailed out of her namesake state on her way to Norfolk, Virginia. There she was dry docked so the hull could be covered in marine growth resistant copper.

The USS Pennsylvania was a huge ship for her time, with four rows of gun decks carrying up to 136 guns. She was 210 feet long, with three masts and a displacement of 3,241 tons. It took a huge crew of over a thousand to operate her.

She was considered by some “the pride of the Navy and the honor of our Union” but was awash in political intrigue and criticism for her expense, antiquity, and lack of purpose. It was a project that would not die. Finally, she was burned at the onset of the Civil War in April 1861 to prevent her use by the Confederacy. A sad life for a great ship.

Imagine the designers and builders who infused her with their talent, sweat and bruised knuckles. This was a great project to show off to family and friends. Something bigger than themselves. Something that could inspire others. However, it never amounted to anything important. It was basically a jobs program. Another humbling lessons for me as I flounder about pursuing greatness.